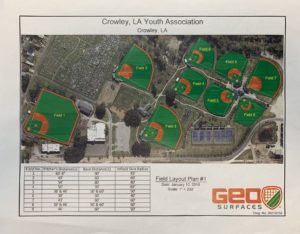 Installing artificial turf and new lighting, along with various other upgrades at the Crowley Recreation Department complex received unanimous support from the City Council during a special meeting on the evening of June 25.
The total estimated cost of the proposed GeoSurfaces (artificial turf company) contract to convert Crowley’s nine ballfields from natural turf, install new fencing, Miller Stadium Champion Wall, backstop/netting replacement, and provide the new lighting systems for all nine fields comes to $5,057,900.

This total cost will be reduced by $210,000 with GeoSurfaces’ commitment to cover the cost of lighting two fields in exchange for sponsorship signage to be placed at those fields. Therefore, a total cost for the contract will be $4,847,900 in a turnkey ready-to-play complex. The city will have 12-13 years to pay off the artificial turf fields with one year of deferred payments.
Many Crowley Citizens were present at the meeting to show their support for the city investing in a new turf facility and some individuals wrote in to the council to show their support.
Some of those supporters included:
• Tim Robichaux, Youngsville Sports Complex Director.
“The City of Crowley has been my home for my whole life and is very dear to my heart,” Robichaux said in a letter submitted to Crowley City Council. “I’m grateful to have been asked to offer my support for the decision to add synthetic turf to Crowley’s baseball and softball fields. Thanks to the rich history of baseball in the City of Crowley, especially at Miller Stadium, I was lucky enough to have grown up around the game. Baseball is in my blood and recreation sports have become my passion.  After serving as the Crowley Recreation Director for 13 years, I was blessed to be offered the opportunity to become the director at the new Youngsville Sports Complex in 2012. Coming to Youngsville allowed me to witness first hand the incredible impact of a new, turf facility on a community and its local economy.”

• Ben Berthelot, president and CEO, Lafayette Convention and Visitors’ Commission.
“I commend the City of Crowley for their vision in looking at upgrading their fields to turf and installing LED lighting. Here in Lafayette Parish our economy has benefited tremendously from the additions of the Youngsville Sports Complex, Broussard Sports Complex and improvements to Pelican Park,” Berthelot wrote. “Summer used to be the slowest time of year for the tourism economy, but now the sports market is our fastest-growing segment and the ballparks are driving traffic to our hotels and restaurants more and more each year, particularly during the summer time. On any given weekend, tournaments take place throughout the region… and to have upgraded facilities in Crowley would be another great addition for the region.”

• Richard Pizzolatto, former Crowley Recreation Department director, also wrote to the council which was read by Rick Villejoin
“I wish I could be there to support the subject at hand, turfing the fields at the Crowley Recreation Department,” Pizzolatto wrote. “Over the past two years and a half years, I have been working closely with Gaylon White on his new book, ‘Crowley the Best Baseball Town in the World’ and the book is currently at the publishers and will come out in early 2021. This book will bring great national attention and publicity to the Crowley Millers, Miller Stadium, the Crowley Recreation Department and, in turn, Crowley as a whole. Gaylon will be promoting the book on over 25 sports shows that air on both T.V. and radio nationally. Not only will this put Miller Stadium in the national spotlight, it will also put the Crowley Recreation Department in a Cadillac stage. Turfing the fields will help our image in that national spotlight, it will bring the opportunity to host major tournaments… it’s a win-win for not only Crowley, but also business owners. Above and beyond all this we give our youth a state-of-the-art facility, a facility our youth in Crowley deserve… Remember it’s for the children.”

• Jeptha Wall, Athletic Director and Coach at Crowley High School, discussed the impact that the turf could have on the school.
He said that their tournament used to have many more participants however, with turf, the games aren’t called off unless it is lightning. He also mentioned that during extremely rainy football seasons, the football players can practice on the turf outfields versus practice in the gym.

• Louie Cook, head football coach at Notre Dame High School, also expressed his support for turfing the fields.
Cook discussed his long tenure coaching at both Crowley High and Notre Dame, stating they both use Miller Stadium for games.
He went on to say that, many years ago he and “Coach Pizz” were able to bid on the LHSAA State Tournament and it was so impressive that Miller Stadium was used for six consecutive years to host that event.

The $4.8 million project will include not only the turfing of all nine fields at the Recreation Department’s complex, but new LED lighting, light standards (poles) and other field upgrades. Miller Field and the second high school field will have college standard lighting and the remaining seven fields will have high school standard lighting, according to Kirsch.

“The reason the cost is so low,” Kirsch explained, “is that we’re piggy-backing off a project in Westlake that’s just finishing up now. There’s no up-front cost to the city, no closing costs and the financial institution is deferring our first year’s payment. That gives us a year to save up.” Kirsch said he estimates more than $14 million in additional sales tax revenue will be added to the city’s coffers in the first year of operation. “Based on a 40-weekend tournament season, we figure about $1.9 million in expenses,” Kirsch said. “We estimate that a 30-team tournament would generate about $350,000 in local sales in two days. “And I’ve already got interest in 51 weekends for the first year.”

The director promised that the travel-ball tournaments would not affect the current Crowley Recreation Program. “We’re still going to have summer baseball in Crowley. I’ve blocked off June and early July for the local all-star tournaments and the kids will be using the field for their games during the week,” he said. “We’re providing a state-of-the-art facility for our kids and tapping into the ‘select’ market is how we’re going to pay for it.”

2D Sports, a tournament logistics company based in Lake Charles, has offered to handle the scheduling of the select — or travel-ball — tournaments for Crowley. However, Crowley Rec has the final voice in booking the fields to the various “select” leagues. “Summer baseball programs across the country have changed dramatically over the last 20 years or so,” said Kirsch. “Select travel-ball is a $19 billion industry now That’s ‘billion’ — with a ‘B.’  To put that in perspective, the NFL is a $5 billion industry. Then there’s the real estate mantra– location, location, location.”

“When Youngsville and Broussard built their complexes, they built out and away from the city. And look what happened. Everything started springing up around the complexes,” said Alderman Premeaux. “Look at where our complex is. To get to it from the interstate, these teams will have to drive right through our downtown area, right by our restaurants, right in front of all the shops.”
Premeaux, who has been chairman of the city council’s Parks and Recreation Committee since he was first elected to the council 22 years ago, pointed to the city of Zachary as an example of what can happen. “In the nine years since Zachary turfed their fields they’ve got three new hotels and 13 new eateries,” he said. “That’s what we think can happen here.”

Timeline for the project has construction starting in August and completed in December.

The above article was adapted from a recent article in the Crowley Post-Signal, authored by Desiray Seaux.