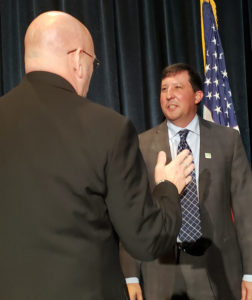 WASHINGTON, DC — The nation’s capital takes on a decidedly Cajun flair this time of year when thousands of Pelican State residents flock to the city and join Louisiana expats to spread the

On Friday, the rich culinary heritage of Louisiana and the entrepreneurial spirit were on display at “Bites on the Bayou,” the Louisiana Economic Development Luncheon, hosted by Congressman Clay Higgins, sponsored by C100 The Louisiana Business Roundtable, and featuring a panel discussion with a Louisiana rice company, a pecan business, and a rum distiller.

Richmond, Mike Johnson, Garret Graves, and Higgins; as well as other state and local officials, and tackled several issues including government regulation and the importance of economic development at home.

Robbie Trahan, co-owner of Falcon Rice Mill in Crowley, Louisiana, talked about his decision to return to Louisiana from a career in Texas to help preserve a way of life in his hometown that he saw under threat.

“There used to be 13 rice mills up and down Mill Street in Crowley, and now there’s only two of us,” he said.  “As an employer in a small town, it’s important for me to be able to remain competitive and reinvest in my business, so I look to government to provide opportunities for me to do that and level the playing field when we’re up against trading partners who aren’t playing by the rules.”

Jeff Murphy, master distiller for Bayou Rum in Lacassine, shared his frustration with Prohibition-era regulations and tax policies that hamper the ability for his business to grow and compete.

Jady Regard, Chief Nut Officer for Cane River Pecan Company in New Iberia and the panel’s moderator, talked about how the trade war with China affected his business by driving up packaging prices.  “As primarily a corporate gift company, boxes and packaging are very important to us,” he said.  “A 30 percent spike in prices as a result of tariffs was just not a cost we felt we could pass on to our customers.”

Trahan agreed and said the rice industry was similarly impacted by trade uncertainties.

“Around the world rice markets are so manipulated,” he said.  “We are dealing with countries that are subsidizing their rice production, making it really difficult for us to compete, and even dumping rice in what are traditionally our markets.”

The three business leaders spoke positively about government policies and local initiatives that allow them to reinvest in their local communities, and Congressman Higgins summed up the afternoon when he said it was obvious to him that “government needs to be a partner, not a predator.”