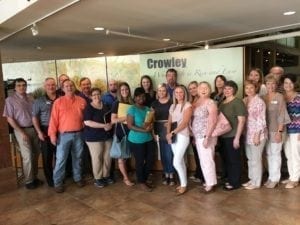 On Wednesday, July 18th the 7th session of the 2018 Leadership EXCEL program brought participants across Acadia Parish with the goal of raising awareness of its strengths and assets.

Participants found themselves at Crowley City Hall first thing Wednesday morning where they were greeted and welcomes by Mayor Greg Jones. As an EXCEL graduate he spoke of the importance of community involvement and how the experience of the program gave him the notion to run for office. The group was then addressed by Tourism Coordinator, Charlotte Jeffers who gave them a brief history of the city and its formation and development through the years. After, the class was able to tour The Rice Interpretive Center, J.D.Miller Music Recording Studio and Ford Automotive Museums.

Through the hustle and bustle of downtown movement on a weekday morning, the class made their way across the street to the Grand Opera House of the South. Executive Director, Kim Gielen gave them the ‘grand’ tour as well a history from the years of Dave Lyons to today!

After, the EXCEL Class made their way over to Falcon Rice Mill where Dwayne Fulton & Robert Trahan provided insight into the milling process, while guiding the group on a walking tour of the facility.

Lunch at Fezzo’s was sponsored by Acadia Parish Assessor, Jim Petitjean. After the meal, Jim spoke of his time serving Rayne as Recreation Director to Mayor and the progress the City has made since then. He also briefed the class of advancements within the Assessor’s office and what he has accomplished during his time there.

Participants then departed to Church Point where they visited Church Point Wholesale. The group was given a brief history upon arrival by Sales Manager, Gary Duplechin and President & CEO, Jack Casanova. After, they were taken on a guided tour through the entire warehouse and facility.

Leadership EXCEL stands for Experience in Community, Enterprise and Leadership. The program is designed to prepare emerging leaders to meet the future leadership needs of our community. Through the exchange of viewpoints and experiences, participants are exposed to the challenges, opportunities, and vital issues affecting Acadia and Jeff Davis parishes. The EXCEL program is hosted by the Acadia Parish Chamber of Commerce in conjunction with the Jeff Davis Chamber of Commerce.