The 10th Annual Leaders In Philanthropy Awards, an event of Community Foundation of Acadiana, are presented annually to outstanding individuals, couples, and corporations who have supported nonprofit organizations, churches, and schools through charitable giving and/or philanthropic work.

Isabella and Dr. Benton Cason de la Houssaye, Jr., are the recipients of the 2021 Leaders in Philanthropy Award for Acadia Parish.

Community and public service were instilled in both of them at a young age and together they have generously given of themselves and their gifts to Acadia parish.

Along with a distinguished record of public service, Mrs. de la Houssaye has dedicated her time and talent to community service for over fifty years. She served on the board of the Crowley Chamber of Commerce and has been a member since its inception. As an active member of the Crowley Rotary Club, she led the civic organization as its president from 2010-2011.

Mrs. de la Houssaye served as president of the American Legion Auxiliary and was a founding member of the Crowley Art Association. In addition, she served on the boards of The Grand Opera House of the South and United Way of Acadiana.

As a member of St. Michael The Archangel Church, she has volunteered in several capacities including as a communicant to shut-ins and hospital patients, lector, and lay minister. Today, she remains active in several organizations and philanthropic efforts aimed at helping others and building a better community.

For over fifty years, he has been engaged in the development of the healthcare system of the community to ensure access and quality for its citizens. He generously gave his time and skills to the board of directors of the American Legion Hospital. He has also traveled on medical missions to Haiti to deliver care to the global community.

Dr. de la Houssaye is passionate about the attention and care veterans of our country receive. He has been a member of the American Legion Post 15, for over fifty years in which he has served as chaplain, vice commander, and commander.

Commitment, courage, compassion for others, and a never-ending drive to make their community a better place for all, are the principles that have guided the de la Houssaye’s journey of generosity.

They have four children and twelve grandchildren who continue their legacy of giving. 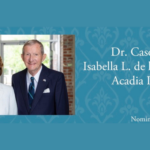