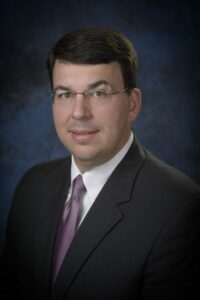 Louisiana (FNB), announces James (Jim) Lyons, Jr. has been named as President of FNB. Lyons joined the FNB team in 2006 and has assumed  various managerial responsibilities in loan operations, compliance, commercial lending and most recently serving  on the executive leadership team. In addition to being named as President, Lyons was appointed to First National  Bank of Louisiana’s Board of Directors.

A native of Jennings and graduate of Notre Dame High School in Acadia Parish, Lyons earned a Bachelor’s Degree from Louisiana State University in Business Management and then completed his MBA from the University of New  Orleans. Lyons completed the Graduate School of Banking at LSU, a curriculum specifically designed for leaders  in banking. In 2020, Lyons was selected by Independent Banker’s in their annual “40 Under 40”, which recognizes  40 emerging community banking leaders, under the age of 40 that share innovative ideas and community minded  traits. Those selected represent the future of the community banking industry.

Lyons resides in Lafayette with his wife, Elizabeth Lyons and their three children. He is a member of St. John’s  Cathedral, an active member for the ACTS program, and a member of The Cathedral Foundation Board.

“We are pleased that Jim will lead our organization into the future”, stated Prather. “We were very fortunate to have  found Jim early in his career. He has dedicated years of growing in knowledge and experience with FNB. His  leadership and exposure to all areas of banking will serve us well.”

Rose Miller has been named as Chief Executive Officer. Rose has over 40 years of experience in the banking  industry, beginning her career as a Loan Processor and working her way up to one of the most successful commercial  lenders in the Lafayette Market. Prather attributes her success to her reputation built upon her integrity, humility and attention to detail.

Rose is married to John Miller and they reside in Scott. They have three children and five grandchildren. She has  been a member of various community and civic organizations throughout her career. Rose and her husband are members of Saints Peter and Paul Catholic Church.

Replacing Lyons as Chief Operations Officer is Cindy Miller, who has also been named as the Chief Compliance  Officer. Cindy has been part of the FNB team for over 31 years and has 40 years of experience in the banking industry. Cindy has served the bank in various positions as Lobby Manager, Human Resources, marketing, and  compliance.

of Commerce. She is currently a member of the Lions Club and serving as a Board Member of Empowering the  Community for Excellence. In addition, she has been active in working with the Crowley Main Street organization  assisting in obtaining grants.

Cindy resides in Crowley with her husband, Joseph Miller. They have 3 children and 8 grandchildren. The Millers  are members of Saint Michael’s Church in Crowley.

“Cindy has been a strong leader and communicator,” stated Prather. “FNB is indeed fortunate that Cindy has been  committed to the long term success of FNB.”