The Acadia Parish Chamber of Commerce announced today that Isabella de la Houssaye, a life-long charitable and civic leader in the parish, is named the organization’s 2021 Humanitarian of the Year and will be recognized at the Acadia Parish Honors Banquet set for Thursday, May 20th at the Grand Opera House of the South. 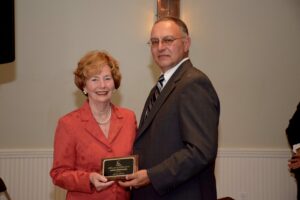 Most notably, de la Houssaye severed as Crowley’s first female mayor from 1997 to 2006. As mayor, while working tirelessly to create an inviting parish seat for residents, businesses and visitors, she led the city through unprecedented growth and development. Prior to her terms in the executive office of the city, she served on the Crowley Board of Aldermen from 1978 to 1994.

Along with a distinguished record of public service, de la Houssaye has dedicated her time and talent to community service for over fifty years to make Acadia Parish a better place to live. She served one term on the board of the Crowley Chamber of Commerce and has been a member since its inception. As an active member of the Crowley Rotary Club, she led the organization as its president from 2010-2011.

She also served as president of the American Legion Auxiliary and was a founding member of the Crowley Art Association. In addition, she was a member of the Republican State Central Committee and the boards of The Grand Opera House of the South and United Way of Acadiana.

Isabella De la Houssaye also remains active in the Crowley Garden Club, the 310 Club, and the Acadia Chapter of the Daughters of the American Revolution and is a strong supporter of Crowley Christian Care Center, Dancing with the Stars Crowley, and several other philanthropic efforts. As a member of St. Michael Archangel Church, she has volunteered in several capacities including as a communicant to shut-ins and hospital patients, lector and lay minister.

Acadia Parish Assessor Jim Petitjean commented on de la Houssaye’s achievements, “Isabella has left a tremendous imprint on our parish. She is a leader with vision, passion, drive, creativity, and equally important, kindness. A lifetime of service to others.”

Louisiana Deputy Secretary of State Allison Clarke and resident of Crowley added, “Through her many roles and actions, she sets an example for all of us. She has touched the lives of countless individuals as a leader, mentor and friend. Most importantly, she has passed her unique qualities and generosity onto her children, grandchildren and many of us who know her to continue her work. Isabella teaches us every day what it means to build a better community.”

Isabella is graduate of Loyola University in New Orleans and is married to Dr. Cason de la Houssaye. They have four children and twelve grandchildren.