The COVID recession that began in March 2020 has had a disparate effect on workers depending on many factors: industry, occupation, level of education parental status, race, and gender. For example, declines in employment have been largest for workers of color and those with less formal education. Such disproportionate effects owe in large part to the fact that those groups are overrepresented in the industries that have been particularly hard hit. For example, significant reductions in in business travel and in-person activities have led to permanent closures across the leisure and hospitality industry. In contrast, some groups of workers, including those who have higher levels of education, and those working in some industries, including transportation and warehousing, have seen employment largely recover.

Since falling sharply in the spring, the fraction of the population that is employed has only partially recovered. This recovery has been predominantly driven by white workers; the employment-to-population ratio (EPOP) remains particularly dampened for Black and Hispanic workers. Those declines in the fraction of population employed reflect both increases in the unemployment rate among those in the labor force as well as decreases in participation in the labor force. In April, when layoffs peaked at unprecedented levels, the unemployment rates for Black and Hispanic workers were almost 20%, while the unemployment rate of white workers was below 15%. While the unemployment rate has declined since then, the racial gap still persists. There are also gaps between men and women, with women and color and young women experiencing particularly high employment rates. With the crisis persisting and the recovery slowing, many are falling into the long-term unemployment, which has serious consequences for a person’s overall economic security.

Another reason for the significant decrease in EPOP has been that millions of people have dropped out of the labor force since February. The reasons that have been cited are many, including lack of job opportunities, health risks from working, and a significant increase in caregiving responsibilities with childcare centers closed, schools operating remotely, and family members falling ill. A greater number of women have dropped out of the labor force, with a particularly large decline in September when many schools committed to remote learning through the fall and winter.

In addition, the declines in the labor force have been sharpest among Black and Hispanic women. Both groups saw their labor force participation rising before March as a strong economy ushered more people into the labor market, but that participation fell to less than 5% at the close of 2020.

The Crisis in the Labor Market in Certain Industries

The disproportionate effects on certain demographic groups largely owes to those groups being disproportionately employed in particularly hard-hit industries. The leisure and hospitality industry experienced significant job loss with nearly 4 million fewer jobs in December compared to February 2020. Employment in government, education and health industries have declined as well. In general, the industries that have fared worse disproportionately employed women and people of color. For the leisure and hospitality industry, employment was made up of 53% women in February. Also, public sector employment is the largest employer of Black workers. 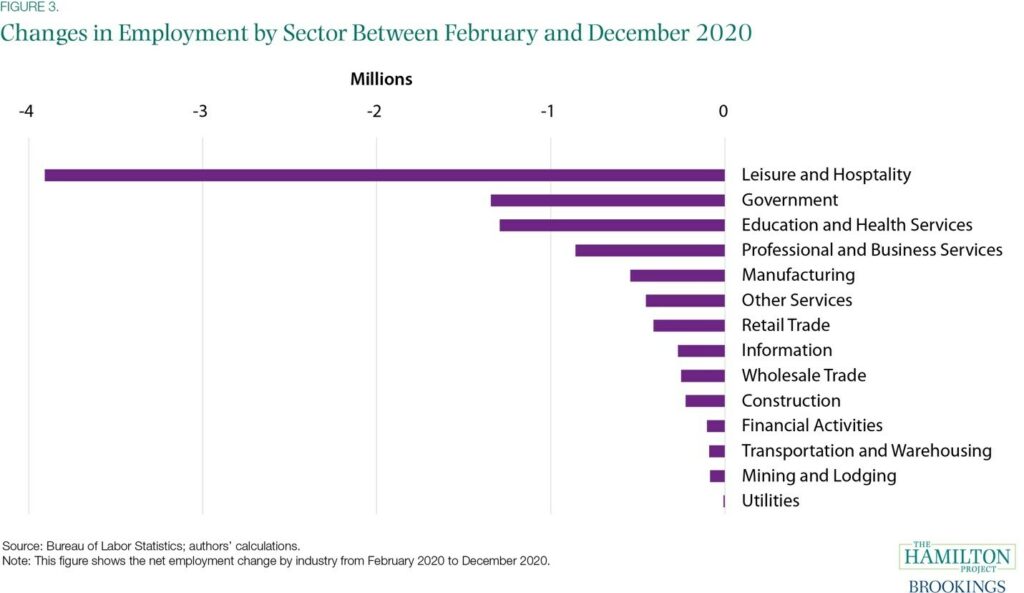 Many people previously employed in harder-hit industries have felt compelled to change industries. As certain industries continue to face pressures and the benefits of switching out of struggling industries do not abate, additional broad-based workforce training would help to facilitate these transitions. In almost every sector, there were more cross-sector moves from December 2019 to November 2020 than the prior year. More than 20% of those who started a four-month panel in the leisure and hospitality, service, agricultural, transportation, wholesale, and retail sectors were reported to be in a different sector within three months. Among those who changed sectors the share who reported a change in employment status (a spell of unemployment or labor force nonparticipation) vastly outstripped those who did not in almost every sector.

There are numerous policies needed to address the labor market challenges facing the millions of people who are out of work. First, measures are needed to ensure people feel safe to resume overall economic activity so that job growth accelerates. Second, household financial resources must be bolstered by the social insurance system, including unemployment insurance, in order to support their spending while the economy is weak and in order to support a more robust economic recovery. Third, overall job quality must be improved including protection for workers who would be at risk as they return to jobs and the assurance of a fair, living wage.

As a result of the long-term unemployment wrought by the COVID recession and the expected changes in labor demand going forward, investments in education and training are also a needed part of the policy solutions. As a group, those with lower levels of education still had not made up their Great Recession employment losses before the COVID pandemic hit. Those with lower levels of education were more likely to have lost their job and were more likely to have to start over in a new industry to find a new job during the pandemic. Providing access to training and education helps people who want to get into higher paying careers do so and is also necessary for some whose jobs will not be coming back.

As some industries might be quite slow to recover and indeed some changes in the labor market are likely permanent, the ability to find employment in different occupations and industries will be an increasingly critical factor in the economic recovery from the COVID recession. David Autor and Elizabeth Reynolds argue that an acceleration in automation as a result of the response of firms to the pandemic will change the composition of labor demand. They write: “We can expect leaner staffing in retail stores, restaurants, auto dealerships, and meat-packing facilities, among many other places. Like the decline of retail, these developments were sure to happen over the longer run. But the crisis has pulled them forward in time, hastening both the accompanying productivity gains and the inevitable labor market adjustments.” Indeed, as described above, already we can see that many people who are getting jobs are getting them in different industries than they were before.

Federal support for workforce training, to help equip people with the different skills they will need for the different labor force they will return to, will be essential for a strong labor market recovery. That support will need to address affordability and access to training both outside and inside of companies. In addition, the most effective policies would ensure that workforce training is of high quality and leads to better labor market outcomes. Efforts to increase affordability are needed at community colleges, as many have proposed, but also at other training providers such as community-based training programs and union-connected training.